Our family were incredibly honoured earlier this year to be invited to be the new Patrons of Kitega Community Centre, although we had serious reservations of being able to follow on from the fabulous dedication and work Nicky and Jane King have given over the last 20 years.

We cannot thank Silas, Janet and the Kings enough for the passion, drive, love, support and hours of work they have freely given to establish Kitega from a dream to an amazing reality which has and continues to change the lives of so many of our African brothers and sisters. 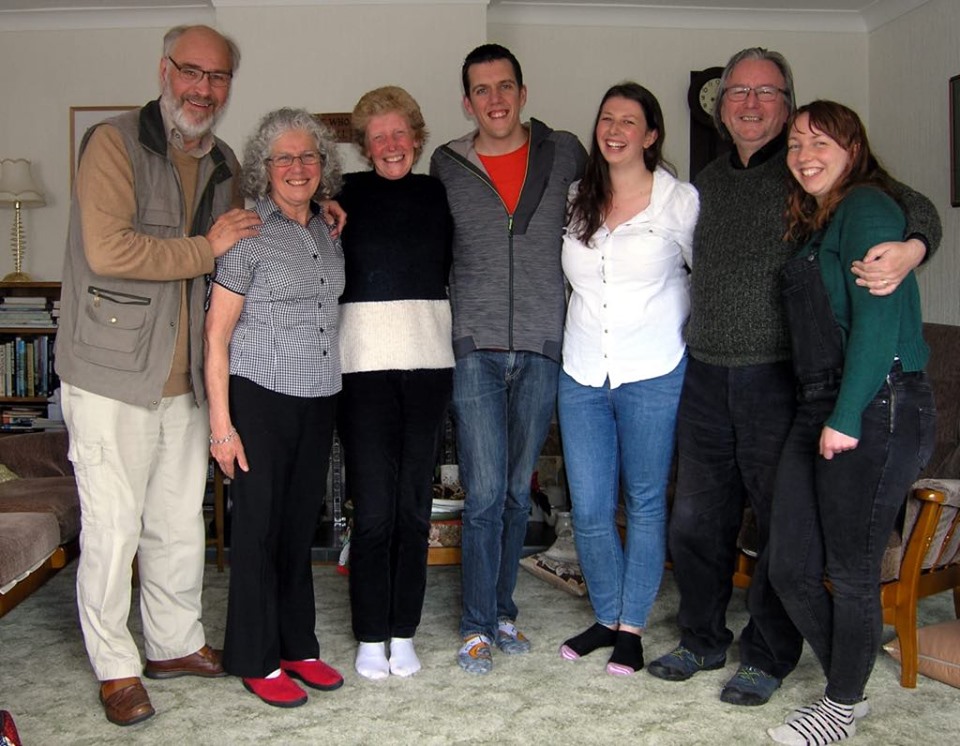 Our first introduction to Kitega was in 2011 when our elder daughter Amy was studying Theology and Childrens’ Ministry at the International Christian College in Glasgow. A visit from David Clemy so inspired her that she rushed home babbling with excitement about the Charity and her simple sentence of “I need to go, this is what God wants me to do” has stuck with me ever since. So a few months later, as a 19 year old, she set out on her own to Africa, with no idea of what she was going to do, where she was going, or even who would meet her at the airport.

Her love for Kitega and the work which was happening  there and her stories when she came home, left me in no doubt when she said two years later that she wanted to go back, that I wanted to go too. I cannot easily express in words the emotions I felt while I was there, but my heart is so full of love for the staff and pupils , the community centre, the unconditional love they have shown us and the exciting work which is going on to address serious problems of exclusion and poverty.

Our younger daughter Jenny visited in 2015, teaching vital lifesaving First Aid skills to staff, pupils, schools, VICOBA groups and even prisoners, and was equally enveloped in the warmth and love which was shown to her.

This year we were able to take the two remaining members of our family – my husband David and Amy’s husband David to finally see for themselves what it is all about and they too are equally as excited and enthusiastic to be involved.

We send all our love and thank you for loving us

When I first visited Kitega I had just finished my second year studying Theology and Children’s Ministry at Glasgow’s International Christian College (ICC) and I didn’t know what I was going to do with my life, but I knew I wanted to work with children. God was definitely involved in my visit to Kitega and spending the days in the classroom working with the children I felt I was being called to be a teacher. I was never very academic and doing a post-graduate teaching degree in Scotland without an honours degree is almost unheard of. When I came back home I started my third year at ICC and also started applying to do a  diploma in primary teaching. Not unsurprisingly neither big university in Glasgow accepted me, as I did not have my honours degree, but a third smaller university did accept me.

I graduated from ICC in the June and then started the post-graduate diploma in the September. Teaching in Scotland is very different from teaching in Uganda and I wanted to go back to Kitega, since I then had some teaching experience. I was able to return in 2014 when I finished my probation year. It was amazing to be back and see all the changes from the first time, but also use some of my teaching experiences.

Every year since I have been able to share a small amount of Kitega with each class I have taught, but this year was able to share Kitega with my whole school. This was because we visited during our Easter holiday so I was able to share photos and stories before I went and then update the school and in particular my class with even more stories and photos when I returned. I love that since that first solo visit in 2012 my whole family and now husband (as well as loads more Scottish folk) have now come and experienced the love and warmth of Kitega. I wish Scotland and Uganda weren’t so far apart in the word so we could visit more often, but it makes it all the more special when we do come and visit.

Kitega has stolen a huge part of my heart and I am so honoured that we have been asked to be patrons and pray that God will guide us all in how we can help everyone at Kitega and share Kitega with everyone we meet.

Hello, so I have been involved with Kitega for the same length of time as Amy just in a slightly different way, let me explain. Amy and I started going out with each other in January 2012, just after that Amy told me, after only a few weeks of going out, that she was going to Uganda for a whole month. Not only that but she had no real idea where she was going or who was meeting her at the airport, it was apparent that God was playing a massive part in this journey.

After a month apart Amy came back a different person. She fell in love with the centre. Since that time, I have always wanted to go and experience the centre and the love you all give. When Amy said that she was returning in 2014 I unfortunately could not attend due to my work. I am currently a Police Officer with Police Scotland and it is difficult to get a long period of time off. Fortunately, God again had a hand in this, as I eventually made it out this year in 2019, and I fell in love with the centre and the area. The children have stolen my heart and I wanted to bring them all home or even just move out to the centre myself (and with Amy too obviously).

When we were out in Uganda, we were all honoured to be asked to be patrons of the centre and continue the amazing work that has already been carried out by the Kings and Silas. I am looking forward to the day when I get the chance to return to the centre and see everyone again.

Unlike Amy I have always know that I would like to travel and Africa had always captured my heart. I was as surprised as everyone else when Amy suddenly announced that she was going to Uganda for a month, little did any of us know how much of an impact that trip would ultimately have on our whole family. I finally got a chance to visit the centre in 2015 with my flatmate where we were able to teach both staff and pupils some basic first and. While we were there we were both able to experience first hand the contagious love and joy at the centre.

Sadly I was unable to return with the rest of the family this year as I am currently studying for a Master’s degree in Public Health and Wellbeing and unable to get time off then. However, I was very excited to hear about the progress made and the plans that are in place for the centre. I am already a registered nurse and I have a passion for helping to reduce health inequalities and to improve access to good quality healthcare.

I have now volunteered in various countries across Africa (and am currently in Ghana) but I can honestly say that nothing has surpassed the love and support shown by staff and pupils to everyone at the Kitega Community Centre. It is very humbling to think how far the centre has progressed through God’s grace and under the direction of Silas and the Kings.

I am honoured to be able to support the Centre in such a way and I am excited to see where the journey ahead will lead.

My introduction to Kitega was, of course, Amy’s excited tales of what she had found in far-away Uganda. It was obvious that the centre was providing much-needed services and was extremely ambitious in its plans for the future. This was especially evident in the fact that Amy had had the privilege of breaking the ground for the start of the construction of the Shalom house, a building that accommdated us when we visited us in April.

The ambition grows, and there was a lovely continuity in the fact that Amy was asked to once again break ground on a new building, this time the Umoja House, and we are very much looking to see it completed and operational the next time we visit.

It is a measure of Nicky and Jane’s hard work and dedication that our new team of five has taken over from the two them. We all bring our own skills and specialisms to the task and we hope to be able to help David, Brian and everyone else with the Centre’s expansion in our own ways.

With all love and best wishes, David

We are delighted to come as a family to serve as the new team of Patrons and will work together as hard as we possibly can alongside you all with God’s grace and guidance.

Thank you to everyone who has supported Kitega over the years and we pray for your continued support  so that the centre can develop and the work of the VICOBA  and Community resource banking grow and be replicated helping more and more families escape poverty and become self sufficient.

Enjoy your special celebrations for 20th Anniversary – very well deserved and here’s to the next 20!!